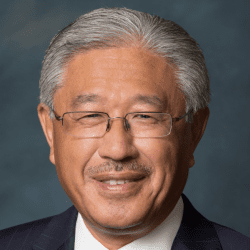 A Call for Systemic Change to Support the Healthcare Workforce

He is an internationally acclaimed leader and physician scientist who has made a significant impact through his seminal research in cardiovascular medicine. His important work on the renin angiotensin and vascular biology paved the way for the contemporary understanding of cardiovascular disease. He pioneered gene therapy for vascular disease and was the first to introduce DNA decoy molecules as gene therapy in humans. His pioneering research in cardiovascular regeneration led to the Paracrine Hypothesis of stem cell action and the therapeutic strategy of direct cardiac reprogramming.

Dr Dzau serves as the inaugural president of NAM, transitioning from Institute of Medicine, and leads a strategy of innovation, action and equity. He designed and led important initiatives such as the Global Health Risk Framework; the Human Genome Editing; Emerging Science, Technology and Innovation and the Grand Challenge in Climate Change and Human Health & Equity, and Redefining Academic Medicine. Of relevance to today’s lectureship is his co-founding and leadership in the NAM Action Collaborative in Clinician Well Being and Resilience which he co-chairs with US Surgeon General Admiral Dr Vivek Murthy.