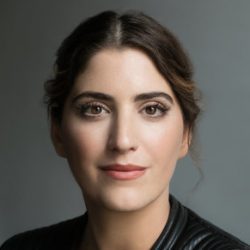 An Emmy Award-winning journalist and celebrated TED speaker, Suleika Jaouad is the author of the instant New York Times bestselling memoir Between Two Kingdoms, which recounts her odyssey of healing and self-discovery after a diagnosis of leukemia at the age of twenty-two and given only a 35% chance of survival.

After graduating from Princeton, Jaouad was ready for her next life adventure: she was in love and had moved to France with a dream of becoming a war correspondent. She was filled with hope and excitement until an unrelenting itch got worse, turning into six-hour naps, mouth sores, weight loss and then ultimately a terrifying diagnosis: acute myeloid leukemia, the most deadly form of leukemia. During a four-year battle with cancer, Jaouad chronicled her illness in her widely read The New York Times “Life, Interrupted” column and video series. Since then she has become an inspiring guide for those living with illness as well as those struggling with and enduring life’s many challenges and interruptions.

After years of fighting for her life and losing some dear friends she had met through treatment, Jaouad was declared cancer-free. Her single-minded focus on survival was no longer necessary, and she soon realized that surviving and living aren’t the same thing. Out of her hospital bed and back in the real world, a once goal driven young woman couldn’t see her future. As she says in her TED Talk “What Almost Dying Taught Me About Living” (viewed over four million times and one of the most popular of 2019), “The hardest part of my cancer experience began once the cancer was gone…. Being cured is not where the work of healing ends. It’s where it begins.”

In search of a way forward, human connection, and self-discovery, Jaouad set out on a 15,000-mile solo cross-country adventure. Traveling to every corner of America, she sought out some of the many strangers who had responded to her column and written her letters during the long, lonely years in the hospital—connections that had helped her through that dark time. Each meeting was a chance to learn, heal, and gain wisdom from people who had shared their own struggles with her, and by the end of her trip she realized that the divide between sick and well is porous and that the vast majority of us live somewhere in the messy middle. Born of this trip, her memoir Between Two Kingdoms, recounts having your life upended and finding the conviction to build another. “Boldly candid and truly memorable” (Booklist, starred review), Between Two Kingdoms is a profound chronicle of survivorship and a fierce, tender, and inspiring exploration of what it means to begin again.

“Beautifully crafted… affecting… a transformative read.… Jaouad’s insights about the self, connectedness, uncertainty and time speak to all of us, not only readers who’ve faced a life-changing—and potentially life-ending—diagnosis.”

The pandemic created another opportunity for Jaouad to ignite the power of human connection and creativity. She established the Isolation Journals, a global project founded during the COVID-19 pandemic to cultivate creativity and connection in challenging times. She explains, “Here at the Isolation Journals, we reimagine isolation as creative solitude. Here, small acts of creativity accrue into something much bigger. Here, stories of vulnerability become stories of resilience and strength, and they unite us as a community.” The project has drawn over 100,000 participants from around the world to engage in weekly writing prompts and virtual events with artists and writers like Elizabeth Gilbert, Rachel Cargle, and Jon Batiste among many others.

Jaouad has served on Barack Obama’s Presidential Cancer Panel, the national advisory board of the Bone Marrow and Cancer Foundation, and the Brooklyn Public Library’s Arts & Letters Committee. She was awarded the Red Door Advocacy & Community Service Award, and has been an artist in residence at Ucross, ArtYard, and the Kerouac Project. She was an Anacapa Scholar in Residence at the Thacher School and a lecturer in the Narrative Medicine Program at Columbia University. Her reported features, essays and commentary have appeared in The New York Times Magazine, The Atlantic, The Guardian, and Vogue, among other publications.

A highly sought-after speaker, Jaouad has appeared on TV and she travels the world teaching workshops and inspiring audiences with her keynotes. Warm, funny, and vulnerable, she engages audiences of all kinds with the story of her life-changing illness, the value of human connection, what it means to be healthy and well in the twenty-first century, and how to thrive in the wake of life’s inevitable, unexpected interruptions.

Born in New York City to a Tunisian father and a Swiss mother, Jaouad earned her BA from Princeton University and an MFA in writing and literature from Bennington College.