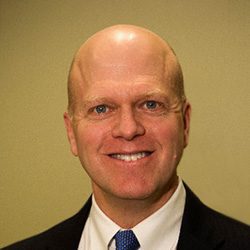 Matt Herndon joined the Schwartz Center for Compassionate Healthcare as its CEO in September 2018.

An attorney with deep roots in the healthcare industry, Matt brings more than two decades of successful strategic organizational growth and leadership to his role. Most recently at Boston Medical Center HeathNet Plan, where he was Chief Legal Officer & Vice President of Government Affairs, Matt was responsible for the organization’s Legal and Compliance, Government and Public Affairs, Public Partnerships, and Human Resources departments. During his tenure, he oversaw the launch of several new product lines focusing on subsidized populations and seniors as well as workforce engagement initiatives.

Prior to that, Matt held leadership positions at Harvard Pilgrim Health Care and in the Office of Massachusetts Senate Counsel.

Matt focuses on strengthening and extending Schwartz Center programs, including our signature program, Schwartz Rounds®, while also working to develop a new strategic framework that will advance our reach in supporting healthcare providers in their efforts around compassionate care.

Matt received his J.D. from Case Western Reserve University School of Law and his A.B. from Bowdoin College. A longtime resident of Massachusetts, Matt lives on the South Shore with his family.