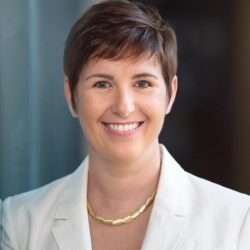 Kate Lally, MD, FAAHPM, serves as an attending physician in psychosocial oncology and palliative care at Dana Farber Cancer Institute and an instructor at Harvard Medical School. In addition, she has served on the faculty of the Institute for Healthcare Improvement since 2013 in their work on The Conversation Project and Conversation Ready. As a result, she has developed and led a number of on-line and in-person educational initiatives for both national and international audiences

Prior to her role at Dana Farber, Lally served as chief of palliative care at Care New England health system in Rhode Island, where she developed a system-wide comprehensive, interdisciplinary palliative care program. As a result of her work, she was invited to testify before the United States Senate Special Committee on Aging and has received numerous awards including “Top Doc” in Rhode Island Monthly, Providence Business News “40 under 40” and was named an “Inspiring Hospice and Palliative Medicine Leader Under 40” by the American Academy of Hospice and Palliative Medicine. She is a graduate of Yale School of Medicine and did her post-graduate training in internal medicine at the Hospital of the University of Pennsylvania.