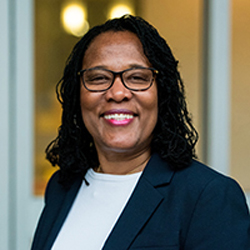 Dr. Gaurdia Banister is the Executive Director of the Institute for Patient Care at Massachusetts General Hospital. The Institute serves as a catalyst for promoting interdisciplinary research, education and clinical practice development. Dr. Banister is also the Director of the Yvonne L. Munn Center for Nursing Research. Prior to accepting these positions, Dr. Banister served as Senior Vice President for Patient Care Services and Chief Nurse at Providence Hospital, a metropolitan community hospital in Washington, DC.

Most recently, Dr. Banister has academic appointments at the MGH Institute for Health Professions and the University of Massachusetts of Boston, College of Nursing and Health Sciences. Dr. Banister is a former Johnson and Johnson Wharton Nurse Fellow and an alumna of the Robert Wood Johnson Executive Nurse Fellows Program. Her research interests include innovative models of interprofessional education, transition to practice considerations for culturally-diverse nursing students and the impact of mentoring on career success and progression.

Dr. Banister was selected as the Fay W. Whitney School of Nursing distinguished alumna and in 2014 the distinguished alumna for the University of Wyoming, where she received her bachelor’s in Nursing. She was also chosen as a distinguished alumna at the University of Texas at Austin School of Nursing where she earned both her master’s and doctoral degrees. Dr. Banister was named as the recipient of the American Nurses Association Mary Eliza Mahoney Award and the Prism Award by the American Organization of the Nurse Executives for her outstanding achievements and leadership in promoting the integration, retention and advancement of minorities in nursing. She is the recipient of the Connell Jones Endowed Chair for Nursing and Patient Care Research at Massachusetts General Hospital. Dr. Banister is also a Fellow in the American Academy of Nursing.