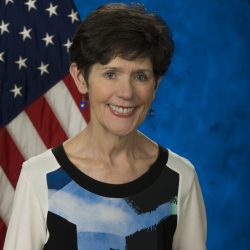 Leading with Compassion: Challenges and Opportunities

Dr. Clancy serves as the Assistant Under Secretary for Health (AUSH) for Discovery, Education & Affiliate Networks (DEAN), Veterans Health Administration (VHA), effective July 22, 2018. The Office of the DEAN fosters collaboration and knowledge transfer with facility-based educators, researchers and clinicians within VA, and between VA and its affiliates.

Prior to her current position, she served as the Acting Deputy Secretary of the Department of Veterans Affairs, the second-largest Cabinet department, with a $246 billion budget and over 424,000 employees serving in VA medical centers, clinics, benefits offices, and national cemeteries, overseeing the development and implementation of enterprise-wide policies, programs, activities and special interests. She also served as the VHA Executive in Charge, with the authority to perform the functions and duties of the Under Secretary for Health, directing a health care system with a $68 billion annual budget, overseeing the delivery of care to more than 9 million enrolled Veterans. Previously, she served as the Interim Under Secretary for Health from 2014-2015. Dr. Clancy also served as the VHA AUSH for Organizational Excellence, overseeing VHA’s performance, quality, safety, risk management, systems engineering, auditing, oversight, ethics and accreditation programs, as well as ten years as the Director, Agency for Healthcare Research and Quality.

She is a highly experienced and nationally recognized physician executive. Dr. Clancy is a general internist and health services researcher, a graduate of Boston College and the University of Massachusetts Medical School. She holds an academic appointment at George Washington University’s School of Medicine and serves as Senior Associate Editor, Health Services Research Journal. She has contributed to eight academic textbooks and authored, co-authored and provided invited commentary in more than 225 scholarly journal articles. She served as member of the National Quality Forum’s Board of Directors, Chair of the AQA Alliance and served on the Board of Governors for the Patient-Centered Outcomes Research Institute. She is an elected member of the National Academy of Medicine and was presented with the 2014 Quality Champion Award from the National Committee for Quality Assurance. She was also named as an Honorary Fellow of the American Academy of Nursing and was selected as the 2015 Outstanding Federal Executive of the Year by Disabled American Veterans. In 2018, she was selected as one of the Top 50 Physician Executives by Modern Healthcare, and in 2019, she was identified as one of the 50 Most Influential Clinical Executives by Modern Healthcare.