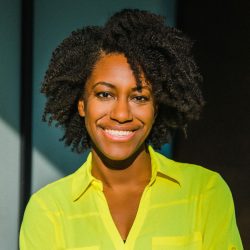 The Power of the Voice: Storytelling in Medicine

Dr. Ashley McMullen is an assistant professor of medicine at the University of California, San Francisco, and a primary care internist based at the San Francisco VA Hospital. She is also a Houston, TX native and lifelong book nerd, who grew up nurtured by her mother, a pediatric nurse, and grandmother, an ordained minister. Dr. McMullen’s work focuses on the role of narrative and storytelling in medical education, and as a mechanism for healing, advocacy, and improving care across differences. She served as the host and producer of The Nocturnists: Black Voices in Healthcare Series, a 2021 Webby Award Honoree, and recently launched a new story-telling podcast with Dr. Kimberly Manning called, The Human Doctor.