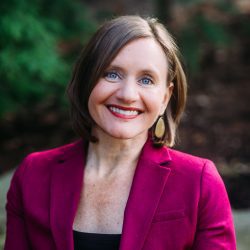 Cheri Blauwet, MD, is an assistant professor in physical medicine and rehabilitation at Harvard Medical School and an attending physician at the Brigham and Women’s Hospital and Spaulding Rehabilitation Hospital. Blauwet is also a former Paralympic athlete in the sport of wheelchair racing, competing for the United States Team in three Paralypmic Games (Sydney ’00, Athens ’04, Beijing ’08) and bringing home a total of seven Paralympic medals. She is also a two-time winner of both the Boston and New York City Marathons.

Translating her background as an athlete to the clinic setting, Blauwet now serves as the chairperson of the International Paralympic Committee’s Medical Commission and serves on the Board of Directors for the United States Olympic Committee (USOC) as well as numerous other leadership roles throughout the Olympic and Paralympic Movement. In 2016, she was the recipient of the Harvard Medical School Harold Amos Faculty Diversity Award and was named one Boston’s “Ten Outstanding Young Leaders” by the Greater Boston Chamber of Commerce. She has become a global advocate for the use of sport and physical activity to promote healthy lifestyles for all individuals with disabilities – exemplified by speaking on the floor of the UN in April, 2015, for the UN International Day of Sport for development and Peace, alongside Secretary General Ban Ki Moon, IOC President Thomas Bach, and IPC President Sir Philip Craven. She has given many talks throughout the world and was a guest at the White House as well as the keynote speaker at the Boston celebration of the 25th Anniversary of the Americans with Disabilities Act.